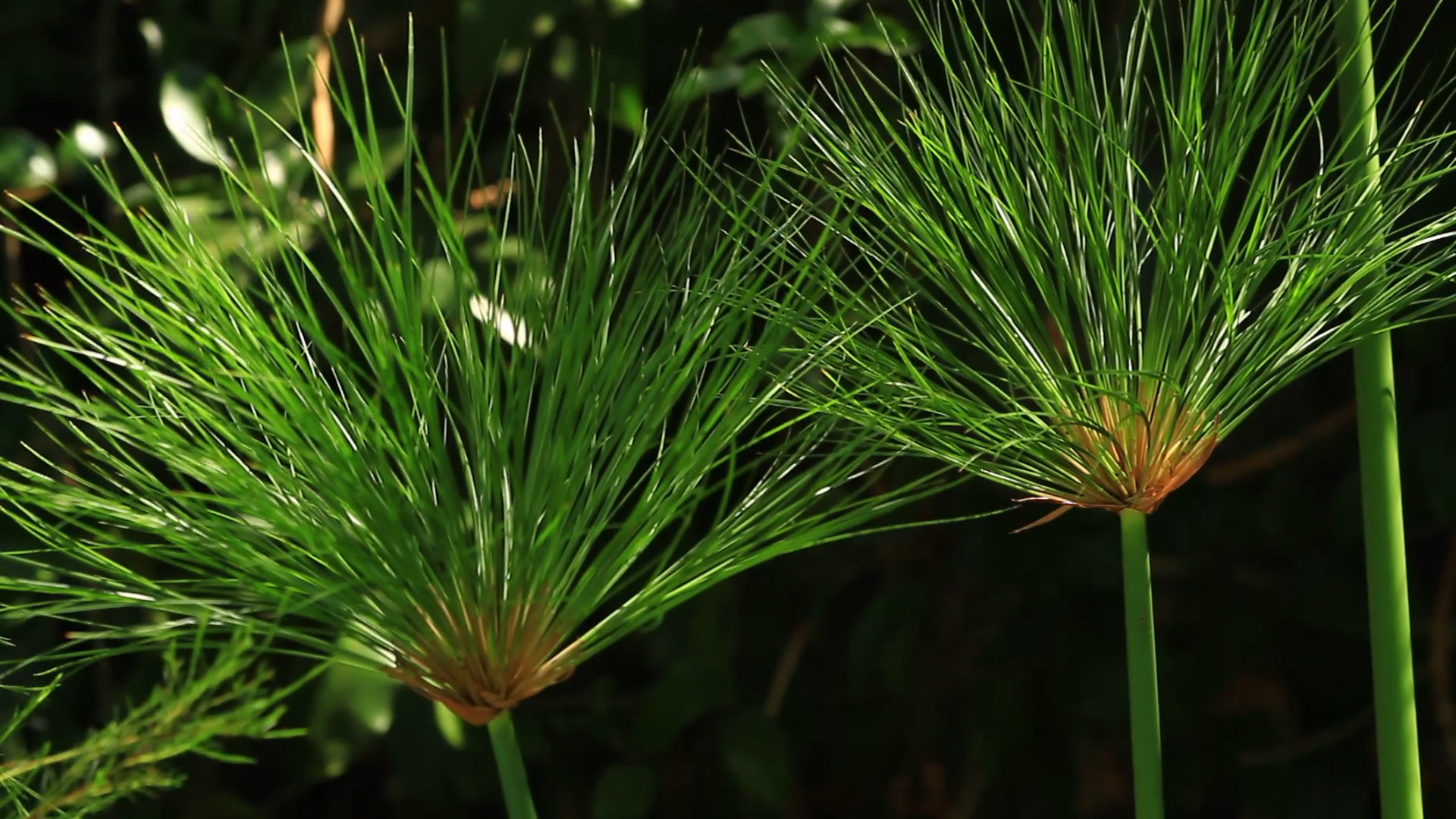 "Anuket is proud to be one of the only importers of single-source, ethically produced, cold-pressed, papyrus oil into the United States."

History and science nerds unite! Today I am particularly excited because together, we are going to geek out a little bit about the origin of our signature product, papyrus oil, as well as how it’s made. I fell in love with the scent of this oil while traveling in Egypt, and when I got back to the states, I was asked about it constantly. Ultimately, it was the inspiration behind Anuket. You can read more about it here!

To help you gain a full appreciation of papyrus, I’m going to take you back to its origins on the watery banks of the Nile River in Egypt. Papyrus oil comes from the papyrus plant (Cyperus papyrus) which is a grassy, aquatic plant that prefers to grow in bodies of water with its roots submerged. However, it can also live on muddy banks and near other watery areas where its roots can remain consistently wet. 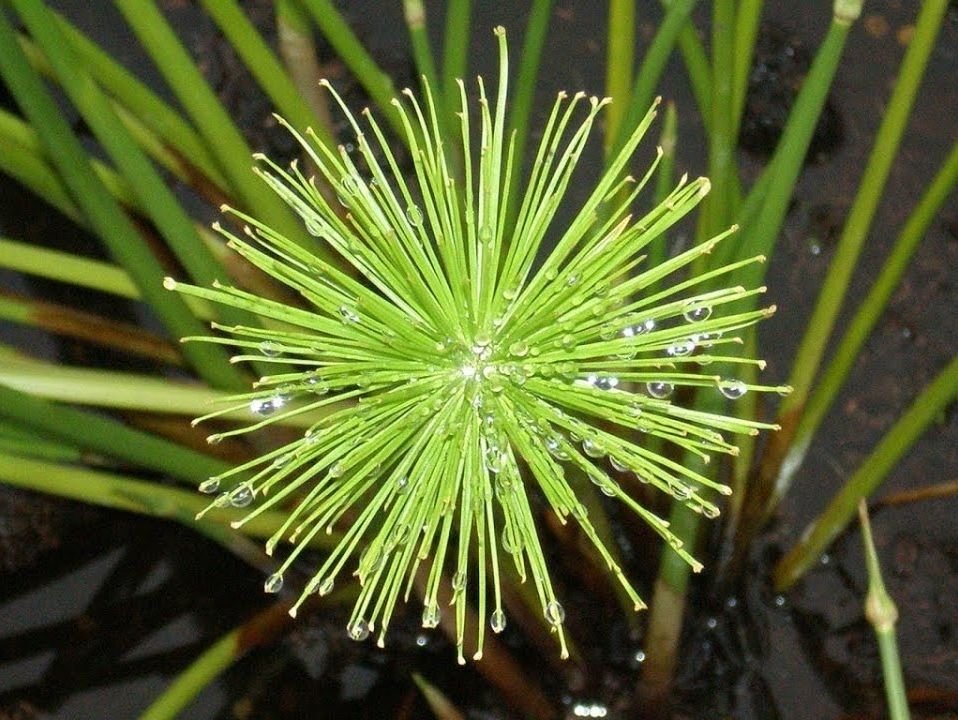 Papyrus can grow to be between 6-10 feet tall. It grows quickly and is happiest in full sun. This isn’t the kind of plant that takes over everything in its path. Papyrus is an independent queen who does her own thing, keeps to herself, and thrives in one place. For centuries, this plant has been used to create a variety of useful products.

You’ve likely heard about papyrus at least once before in school when learning about the first forms of paper. The ancient Egyptians used this as their main source of writing material and its use was eventually adopted by the Greeks, the Romans, and more. If you split the plant, it separates into fibrous strips. They laid these strips crosshatched, dampened them, beat them into a flat layer, and dried them in the sun. The sap of the plant held the “paper” together and the sun-bleached the fibers leaving them with a sturdy, flat, bright material to write on.

Papyrus was used for specific writing such as love letters, religious texts, scientific papers, manuals, official documents, and other literary texts. Practice writing was done on scraps of wood and plants, while papyrus was a labor-intensive product saved for the final draft of writings. Papyrus was also used for a variety of other useful products as well as a food source. Its uses were integrated into a large part of daily life. Papyrus was regularly made into things like shoes, boats, boat sails, toys, window shades, mats, rope, furniture, clothing, medicine, and fragrance.

As a fragrance, it is a pure essential oil that is extracted through a cold-press method. This method is widely used and well known for maintaining the integrity and quality of the properties in an oil. Other methods, especially those involving heat, can damage the molecules in oils, reducing or altering the potency or benefits of the oils.

In most cases, cold pressing is done with not only pressure but the use of centrifugal force that helps to spin the oil away from plant pulp and debris. As pressure is applied, internal heat due to force can generate but it is not nearly as damaging as heated extraction methods. The oil that is expelled due to pressure is then spun outward away from the pulp and fibers of its plant and collected for further filtering to remove the final debris. The result is a clean oil with the full integrity of the antioxidants, vitamins, minerals, and more, still intact and ready for use!

Let’s talk about the appeal of papyrus oil! First, the scent. It is known for being a crisp, clean scent. In ancient times, it was originally more traditional for men to wear the scent. However, it was well known that Cleopatra used papyrus oil in her beauty routine and now the scent is known for its alluring, unisex appeal. Being a pure fragrance oil, its scent is long-lasting and contains no additives or irritants. Read more here to learn the difference between fragrance oils and other types of fragrance. A fragrance oil typically lasts for 8 or more hours on the skin.

Additionally, oils can be used as a base for other fragrances to anchor it to the skin and increase the length of wear. Check out our recent blog for more tips on how to make your fragrance last longer. A light, crisp scent such as papyrus oil can act as an excellent layering product to diversify your fragrance collection and create new, longer-lasting combos out of some of your lighter fragrances. Make no mistake though, the intoxicating scent of papyrus can certainly hold its own as a worn alone fragrance. It has even been known for its use as an aphrodisiac.

Oils have been used as aphrodisiacs since, pretty much, the beginning of documented time. Aphrodisiacs are substances, like a scent or an ingredient, that helps to boost sexual interest, function, or desire. They work in a number of ways such as increasing blood flow, affecting hormone levels, or even just causing a mental response that aids in stimulation. Egyptians specifically have been historically known for their use of oils in this way. They have long been the masters of self-care, skincare, and nourishing beauty practices.

Cleopatra, who is known for normalizing women’s use of papyrus oil, used plenty of oils in her extensive personal care routine, and enjoyed all the pleasures that fragrance in personal care practices can provide. She influenced a multitude of self-care practices that we still use today including soaking baths, scrubs, and face masks.

Anuket is proud to be one of the only importers of single-source, ethically produced, cold-pressed, papyrus oil into the US for our customers to enjoy. The rich history, beautiful scent, and myriad of other great qualities repeatedly make it a fan favorite and our standout signature scent.

Even our name, Anuket, was inspired by the location in which papyrus grows. Anuket is the Egyptian Goddess of the Nile and papyrus, known as the “gift of the Nile,” grows lush and plentiful along the shallow banks. It has provided so much to the communities in which it flourishes for centuries. Each bottle is crafted with love and full of beautiful stories based on the history of one of the lushest river banks on earth. 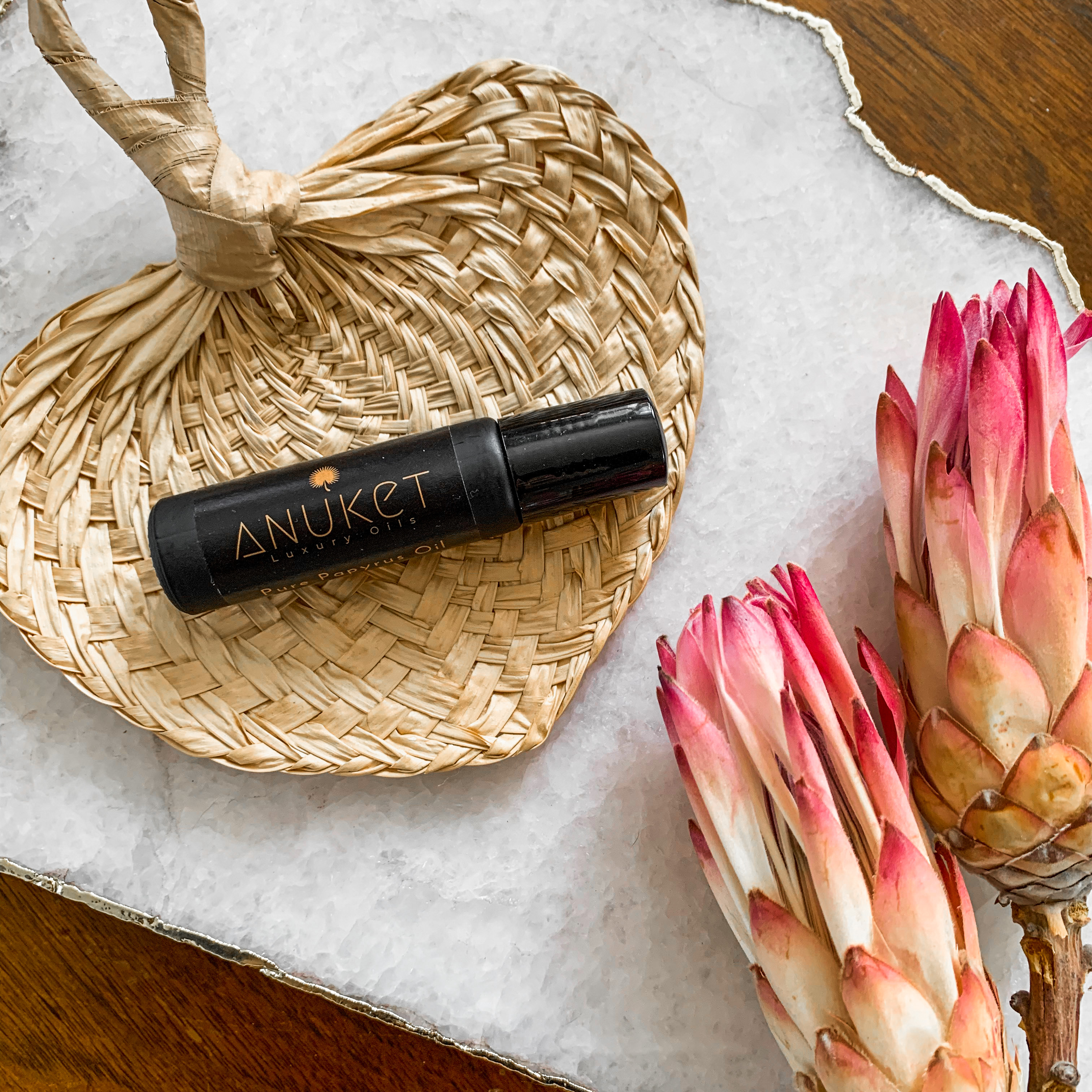 Papyrus oil is my first love. It is my personal favorite and my daily choice to wear. However, since the launch of Anuket, we have sourced five additional single-origin, pure fragrance oils for our customers to enjoy. Be sure to check them out here!

If you enjoyed this mini-history lesson on the origins of our signature product, be sure to leave us a comment and share this blog with a friend! As always, make sure you’re hanging out with us on Facebook, Pinterest, and Instagram for new and exciting content. Don’t forget to subscribe here for emails so that you get all of our first to know updates on sales, launches, events, and more! 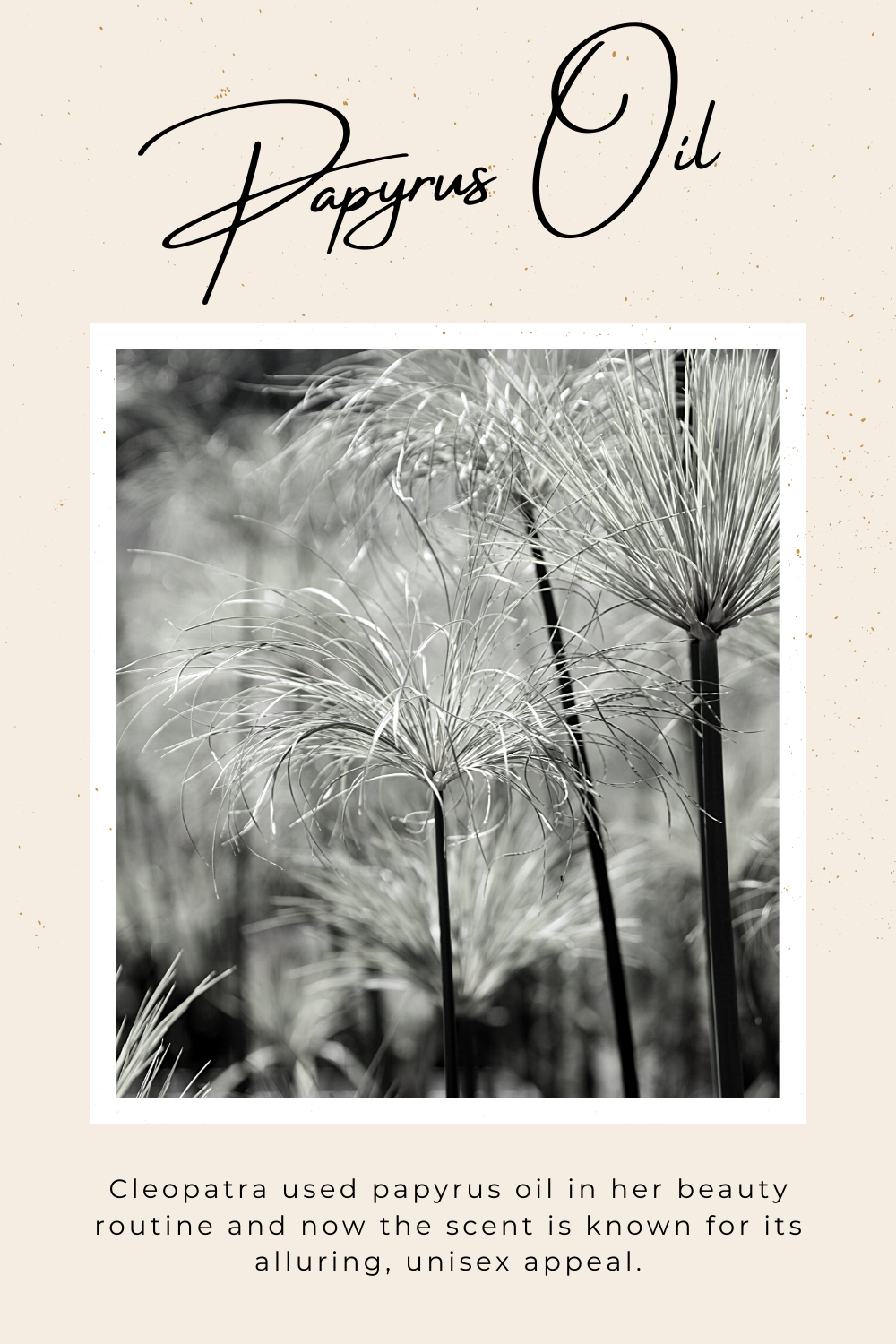 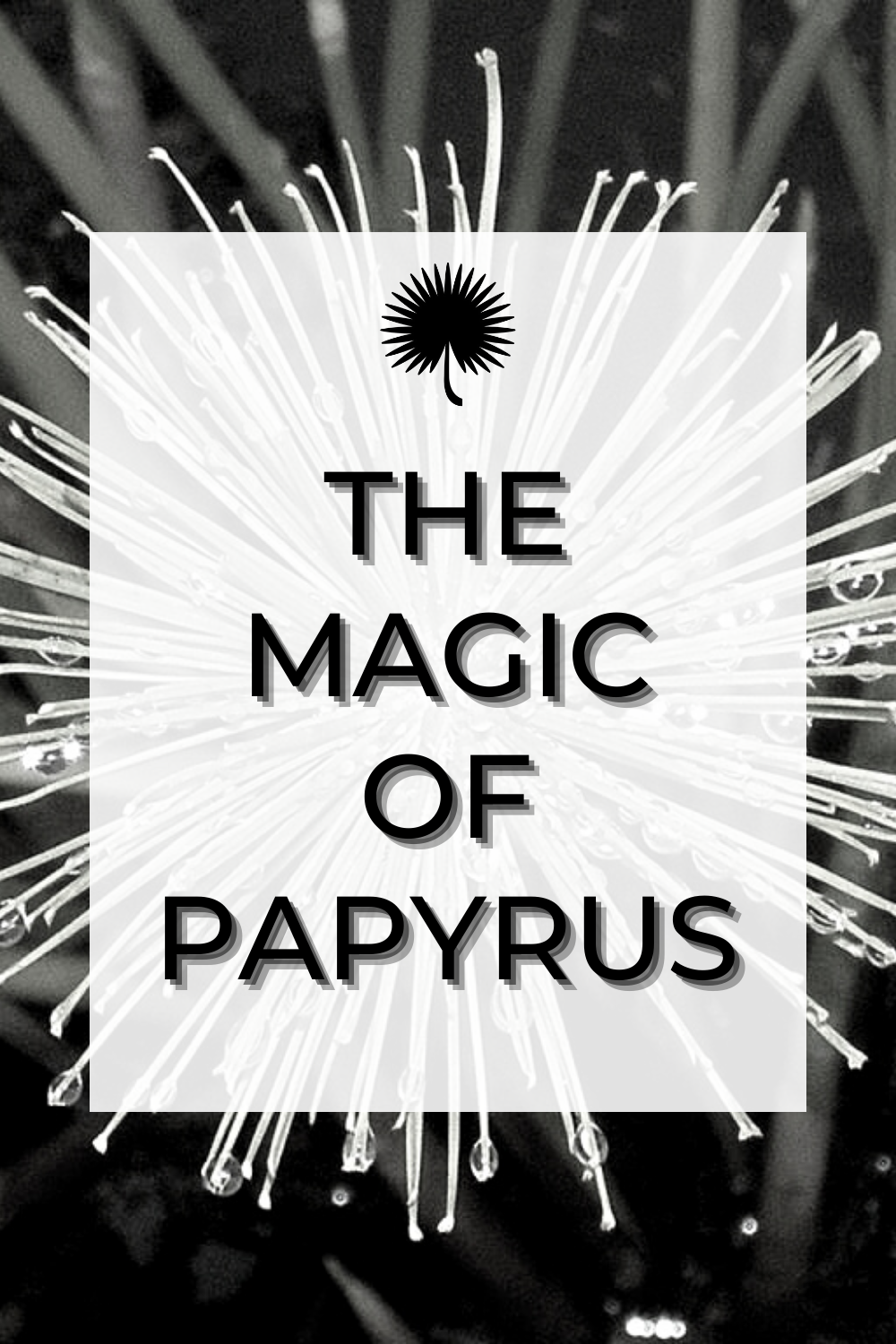 "Papyrus oil is my first love. It is my personal favorite and my daily choice to wear."